Thomas Magill: Man who Lives after Tumbling Down 39th Floor 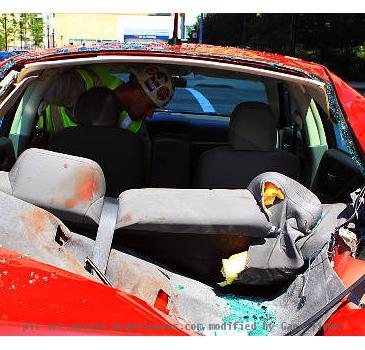 NEW YORK (GaeaTimes.com) — An usual suicide attempt turns out to be an unusual miraculous survival story.

Reportedly, Thomas jumped down the west side building only to crash through the windshield of sports wheel but some how he survived. Though he suffered severe injuries and is undergoing critical surgery, probably for his broken legs. Nothing apart from divine intervention could have saved his life.

Andrew Petrocelli, an witness to the unbelievable event said,

Reportedly, Thomas Magill screamed, “My leg! “My leg!” after landing in the red 2008 Dodge Charger and was immediately admitted to a hospital nearby. Guy McCormack, 40, of Old Bridge, N.J., owner of the crushed Charger, was doing construction work across the streets. According to him a set of crystal rosary beads inside his car saved Thomas’ life.

Magill’s father is taken aback by the mournful incident and is asking friends and family to pray for his son. However, it seems that Thomas has been given a second chance. There may be divine purpose behind his survival. May be the Gods have some plan for him, either ways he needs to understand the value of life.