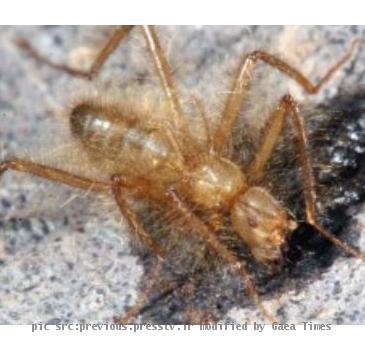 KENYA (GaeaTimes.com) — “Terrible Hairy Fly”, a rare and odd looking fly which was earlier thought to be a species from Africa, has been recently discovered by scientists in Kenya.

The Mormotomyia hirsuta or “Terrible hair fly” was first reported around year 1933 and then was seen in 1948. But after a half a dozen expeditions between the towns Thika and Garissa, scientist have been able to trace it again.

The Terrible hair fly is about one centimeter long and resembles more like a spider than any normal flies. Unable to fly and partial to breeding in bat feces, the fly is thought to live only in the dank, bat-filled cleft of an isolated rock in the Ukazi Hills. It also has non-functional wings that resemble miniature belt-straps, and tiny eyes.

For it’s weird resemblance, scientist are now confused about where exactly it belonged in the evolution process, in the order of Diptera, or “true flies.”

The Mormotomyia hirsuta is the only member of its biological family and some fly experts reckon the fly will eventually prove to be the only family of fly completely restricted to Africa.