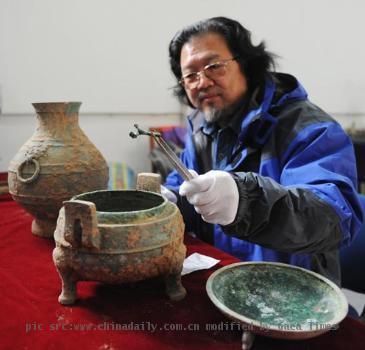 SHAANXI, CHINA (GaeaTimes.com) — According to State Media reports, Chinese archaeologists have discovered what they believe is a 2,400 year old pot of ’soup’ within a sealed bronze cooking vessel. The vessel has been discovered in a tomb near the ancient capital of Xian (home to the country’s famed terracotta warriors).

The scientists from the Shaanxi Provincial Institute of Archaeology has commented that this is the first time they have discovered bone soup which will help them in the study of eating habits and culture of the Warring States Period (475-221BC). The scientists said the tomb could have held the body of either a member of the land-owning class or a low-ranking military officer.

Xian was China’s capital for more than 1,100 years. In 1974, the terracotta army was found there at the burial site of Qin Shihuang, China’s first emperor. Now, with the discovery of bone soup, the place is sure to gain more popularity among archaeologists.

LONDON - The Ancient Egyptians kept close tabs on the Big Dipper, monitoring changes in the constell...

ISLAMABAD - The Pakistan government has decided to preserve the archeological beauty of the city by ...
Copyright© 2010 The Gaea Times